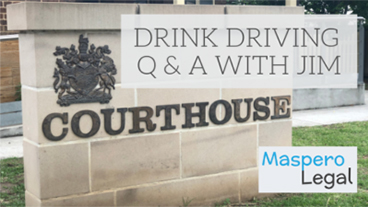 With over 30 years’ experience in defending hundreds of drink drivers across every corner and court of Sydney & NSW, Maspero Legal Principal Solicitor Jim Maspero has seen it all!

In a recent meeting at Manly Local court whilst waiting for his client’s case to be heard, Jim gave some amazing insight into some of the best (and worst) of his experiences as a DUI Lawyer over the last three decades.

Q) What’s been the highlight of thirty years as a drink driving lawyer?

A) There have been hundreds of highlights through the happy faces of my clients after being given a second chance in life, however, one case stands out. A single mother of three living on the outskirts of Sydney was charged with mid-range drink driving. She was set to lose everything if convicted, including being deported back to her homeland of Denmark due to losing her job. After making a number of representations to the magistrate and pleading for her to be given a second chance, she was given a Section 10 and five years later, she has benefited from that opportunity and is doing well.

Another highlight has been my son Jeremy recently joining me- which gives me such a buzz as we truly are a father and son team and love doing everything together. Q) Can you tell us about your least favourite client experience?

A) Whilst working in rural NSW in the early 1990s, my client was convicted for his third drink driving offence. He went nuts in the court room and after swearing continuously at the Magistrate and making all sorts of threats, he was sent to the cells for a couple of hours for a cooling down. Thankfully not all clients are like this and he still thanked me after he was released.

Q) How can you defend guilty people?

A) My job is to separate the evil people from the silly and thankfully most people in our community are not evil and deserve a second chance. Take for example a recent client of mine who was only just 18 years old, had a lucrative sporting career in the works and a clean record. He was charged with low-range drink driving and similar to my above example, was set to lose everything if convicted. He was given a Section 10 in court. This was his first and only chance in life at being forgiven by the legal system and he will certainly spend the next few decades of his life doing everything to not reoffend. For that, I am grateful.

Q) Is it worth hiring a Lawyer for a DUI matter?

A) Absolutely! There is nothing worse than seeing a self-represented DUI offender argue with a Magistrate about irrelevant things and pushing for the wrong plea (for example not guilty instead of guilty). A Magistrate has many options available for DUI offenders and your DUI lawyer is the best person to navigate through these on your behalf.

Getting legal advice as soon as possible for a drink-driving charge is important. Call Maspero Legal today on 02 8052 3322 to discuss your drink driving matter.